Moving from ASP.NET Core 2 to ASP.NET 3 (Migration) there were a number of 'things' I picked up and decided I would document as I moved through the application. New Program.cs and Startup.cs changes, new logging configuration changes, and default ASP.NET Core tips included.

The in process request handler, Microsoft.AspNetCore.Server.IIS, was not referenced in the application. 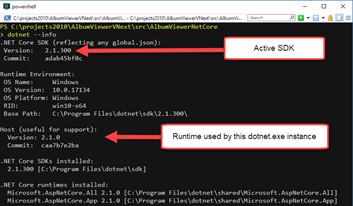 IWebHostbuilder remains for backward compatibility only, and was used to encapsulate DI, Logging and configuration.  This was used in earlier versions of ASP.NET Core 3 for http workloads.

The default .NET Core 3 ASP.NET Core template sets up by default in the program.cs IHostBuilder, which is the recommended for all app types.  Documentation can be found at docs.microsoft.com.  A host can encapsulates dependency injection, logging, configuration, IHostedService implementations.  Hosting is no longer bound to Kestrel and no longer bound to ASP.NET Core (oddly, this means you can start a host that doesn’t require Kestrel and doesn’t even need the ASP.NET Core Framework)

CreateHostBuilder has the following defaults

* the startup constructor use to look like public Startup(IConfiguration configuration, ILoggerFactory loggerFactory) * new to ASP.NET Core 3 it is no longer possible to inject ILogger in Startup.cs and Program.cs (Reference: Github) * Another reference to this change specifically calls this out * Changes with ASP.NET Core 3 to Program.cs / Startup.cs Reference: Andrew Lock
netcore
ASP.NET CORE–Slow Start Up String Comparisons