No IOS simulator or device appear on Visual Studio

Ok, once again – I open a Xamarin Forms app, ensure I have the latest Xamarin Forms version in each of the PCL, Android and IOS projects. The project rebuild works for the PCL and Android projects and fails for the IOS. The error… No valid iOS code signing keys found in keychain.

You need to request a codesigning certificate from https://developer.apple.com What’s going on…I first look to ensure my Mac agent is connected yep, perform a clean and rebuild of each project..same error. The solution for me…. Open the dialog “Xamarin Mac Agent” – right click on the connect Mac – choose ‘Disconnect’. After disconnection – select the Mac and ‘Connect’…waiting (aha …it won’t connect, this could be the problem) Nope – didn’t think it would be this easy. I was able to use the ‘show simulator’ option within vs.net and the simulator popped open on the Mac. I opened another project to see if this issue was related to the specific project. Nope. The 2nd project I opened had the same issue, where in the ‘Device’ list the was no option for ‘iphone simulator’.

I then proceed to open Xamarin Studio on the Mac (currently I am using the Beta channel as this was necessary to work with Visual Studio 2017). There is an update and it started to download. Here is to more hope that this solves the issue.

This update on the Mac will move it up to Xamarin Studio 6.2.0 I tried to find the IOS Simulator after this update. Still nothing. I removed all mac agents, restarted vs.net 2017 a couple times, still nothing. I opened up another project and magically this time the ‘iphone simulator’ option was available. Why…no idea..(this product is going to kill me)

So now I am thinking there is a difference between the 2 projects. Why would I have the simulator option in one but not the other? This is really messed up. So I open the project that does not have the ‘iphonesimulator’ option, I can see within Configuration Manager that this option exists and I can connect, build, deploy to Mac simulator.

Well this scenario is new to me…no idea. 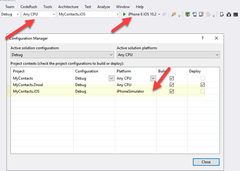 xamarin
The type 'Object' is defined in an assembly that is not referenced. You must add a reference to assembly 'mscorlib, Version=2.0.5.0 Keep Nuget Packages Out of TFS (Source Control)