What’s going on?  I want to run my Android emulator (XAP – Xamarin Android Player) and I get the following issue.

Ok, what’s going on today with my Xamarin Player.  A bit of Google-ing came up with the following information announced at the 2016 Evolve conference. < New Mac OS X Universal Installer

To streamline development setup on Mac OS X, we have introduced a brand new universal installer. This will not only handle updating to the latest version of Xamarin, but also will setup the new and improved Android Emulators from Google, based on x86 HAXM, that are now 10 times faster then before! If you are on Windows using Visual Studio be sure to checkout the Hyper-V enabled

Visual Studio Emulators for Android that make debugging Android apps a joy. With these enhancements to the Android emulators for both Mac and PC the Xamarin Android Player is now officially deprecated. We hope that you love this new setup process and the new emulators.

Wow - Xamarin Android Player is now officially deprecated – This honestly was a surprise as it had worked so well for me in the past.
So as instructed checking out the Hyper-V enabled Visual Studio Emulators for Android

I downloaded, installed the emulator promising “The x86 emulator boots and runs at nearly the speed of a physical device, making debugging a breeze on graphics-intensive, processor-hungry apps.” 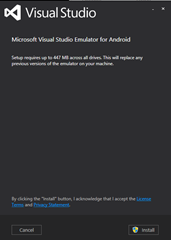 After the installation, I was required to restart.  I opened my Android-Xamarin app thinking I would find this emulator choice in the Visual Studio Device drop down.  Nope.  I found ‘Visual Studio Emulator for Android’ as a recently installed application.  I soon made that attached to my task bar for ease of finding next time.  Starting it, I was challenged with the next hurdle. “You do not have permission to modify internal Hyper-V network adapter settings, which are required to run the emulator” – I hit ‘Retry’ and it appears to be running with the

I hit ‘Retry’ and it appears to be running with the following notification.  Still preparing, I am starting to wonder if anything is going on.

Bang – I am starting to see something with “OS – Starting” and I now see the emulator.  Whew.

Checking things out, clicking around I try the web browser, and given another test of my competence.  So the problem is, I cannot browse to the internet via the Android Emulator default browser.

I uninstalled Xamarin Android Player – figuring I didn’t need this any more ..moment of silence please.

Ok, so using a few of my Sherlock skills I opened up Hyper-V Manager (found via start search).  Select the emulator then the settings option for that emulator.

I then selected the ‘Emulator External Network Adaptor” and chose my physical network adapter, closed/shutdown the emulator and restarted.  Great- challenge completed and all seems to be working. 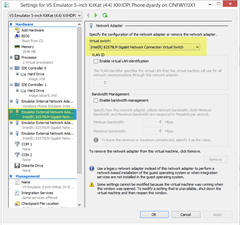 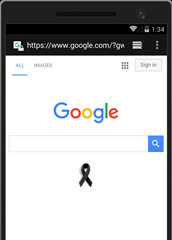 Circling back to my Visual Studio – I am not able to use the Visual Studio Android emulator by selecting the appropriate device.  I have successfully removed the Xamarin Android Player, installed the new/improved Visual Studio Emulator and made modifications via Hyper-V Manager to set the network connection of the device to my local hardware on my pc.